Spanish urban planners in the New World know how to create a vibrant community: its two interconnected building blocks were a cathedral and a plaza. This spatial structure compelled the citizens of New Spain to revolve around a civic center, timing their movements to the comings and goings of their neighbors with whom they worked, played, and prayed.

The 1730 plan for San Fernando de Bexar (San Antonio) drew on this tradition, beginning with the iglesia, the town's 18th-century church that later became a cathedral. From its front door, surveyors marked off Plaza de las Islas (Main Plaza) and a set of radiating streets along whose flanks government buildings, stores, and individual housing would be built. The whole plaza was locked in a grid, forming "a cross with the church as a center."

This circulatory pattern stimulated a robust street life, especially in the plaza. Its open-aired expanse was crowded with religious festivals, political rallies, military formations, and civilian parades. Amid its dust rose the noise of merchants and shoppers haggling and gossiping, of people dancing and mules braying. Plaza de las Islas, this dynamic, intimate, and walking landscape was the city's communal core until the late 19th-century arrival of streetcars, which started pulling people away from the plaza. 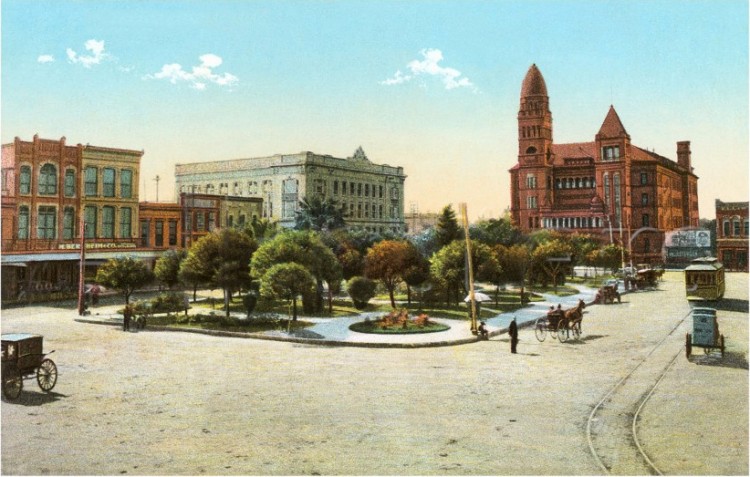 As the city swelled in size, the plaza itself shrank as a result of the widening of market street in the 1880's and the construction of a new county courthouse that filled in a portion of its southern quadrant. As other tall buildings rose over the plaza, replacing more human-scaled structures, its wide-open character and dirt-packed surface were also transformed. The center was elevated and planted with trees and grass, while the surrounding streets were paved. Citizens protested these significant alterations, but to no avail: the plaza had become a park.

Bypassed, like most of downtown, until the late twentieth century, the plaza has since figured in several revitalization efforts. Launched in 2006, city planners sought to recreate its pedestrian character by knitting together the plaza, cathedral, courthouse, and the river. In this way they hoped to promote a re-engaged citizenry and a re-energized civic life.

The Redevelopment of Main Plaza

Private contributions joined public investment to make the vision of a redeveloped Main Plaza a reality. Local companies and foundations donated more than half the cost of revitalizing this community treasure. Those private resources have brought modern-day conveniences to the Plaza.

A $2 million donation from the Tobin Endowment provided funding for five interactive, ground-level fountains.
A grant from AT&T makes Main Plaza WiFi enabled, providing free high-speed internet access to the public through an embedded wireless network. People with wireless card devices can sit in the plaza and eat lunch while surfing the internet, gaming, or getting some much-needed work accomplished in a relaxed setting.

Additional monetary donations are contributing to improvements in the Plaza that will enhance daily life in a public setting, creating a highly desirable escape from the traffic and noise of urban life.

The grand opening of Main Plaza took place on April 13, 2008. The opening was celebrated by a mariachi mass at San Fernando Cathedral. The following community leaders were a ceremony and dedication keynote speakers:

When visiting Main Plaza, be sure to look for and locate all 19 significant, historical pavers embedded into the floor of the plaza. All indicate historical events, all are true.
Locate this paver:

Captain Toribio de Urrutia and Fray Santa Ana now determined to do their best to establish a permanent and lasting peace with the Apache nation. ...this was a great day for San Antonio. After thirty years of depredations, the harassed settlement was about to secure, as was thought, a lasting peace. Early in the morning, the plaza began to fill with an eager throng... First, a great hole was dug in the center of the plaza, and in this were placed a live horse, a hatchet, a lance, and six arrows, all instruments of war. Then Captain Urrutia and the four Chiefs, joining hands, danced three times around the hole, the Indians afterwards doing the same with the priests and the citizens. When this ceremony was concluded, all retired to their respective places. Then, upon a given signal, all rushed to the hole and rapidly buried the live horse, together with the weapons, thus signifying the end of war...

The historical content herein has been thoroughly researched for its accuracy by Char Miller.

Char Miller teaches at Trinity University in San Antonio and is currently a visiting Professor of Environmental Analysis and History at Pomona College in Claremont, CA.

Miller has written extensively about San Antonio's history, culture, and politics and is author of the award-winning Deep in the Heart of San Antonio: Land and Life in South Texas, and is editor of On the Border: An Environmental History of San Antonio and of Fifty Years of the Texas Observer, among other works. He served as a consultant to the Main Plaza re-development project and was a member of the city's Open Space Advisory Board and its Tree Preservation Ordinance Committee.

Thank you Char, for giving us a piece of San Antonio through its history.